I promised recently to review Skulduggery Pleasant – The Faceless Ones.  Well, time has moved in and I was lucky enough to receive MORE book tokens (thank you, thank you, thank you!) and so I returned to Waterstones to see the best bookshop assistant in the world and get the next book in the series – Dark Days.

For anyone not familiar with the Skulduggery Pleasant series, each book is a separate adventure but also a continuation of the relationship between the deadpan skeleton detective and Stephanie aka Valkyrie Cain, the teenager who just loves kicking the hell out of zombies, vampires and even more undesirable beings.  In this, the fourth book, Valkyrie spends just a few short pages at home, despite the news that her parents are expecting another child.  She is determined to save the world from present and prophesied evil, and is more than adequate for the task with the help of Skulduggery, Tanith the buxom swordswoman, Ghastly Bespoke the disfigured tailor, China Sorrows the irresistible magical librarian, and various other brilliantly imagined and deftly named characters.  Valkyrie discovers the pains of first love, but also a hint of her possible future destiny – it’s not nice, of course.  Landy doesn’t do nice.   He does action, horror and dark humour – but never nice.  Even when Skulduggery is rescued from eternal torment as the plaything of the Faceless Ones, it takes until almost the end of the book for him to hug Stephanie and say thank you.

Landy takes a risk with this book, as the first ninety pages do not feature Skulduggery at all, and it does feel a little flat until Skulduggery and Stephanie are reunited.  However, after this the magic seems to return and the tension builds as the baddies unite to form a Revenger’s Club and… well, get revenge.  On Stephanie, on the Sanctuary (the seat of power in the magic underworld) and on 80,00 spectators at Ireland’s Croke Park stadium, just to make a point.  As usual there’s some great fight scenes including a chase through a basement of vampires.  There is also a deeper threat running through the story; a being called Darquesse is coming and if you thought things were bad for Stephanie now they are going to get worse – much worse.

Even though it still delivers a punch, the formula has become a little familiar and I imagine that as the fourth book it will only attract readers who have enjoyed the other three.  I admire Landy’s reluctance to include backstory from the previous books but it can sometimes be confusing to remember which villain is which and what their powers are.  And I would have liked Stephanie’s homelife to feature more so I could see how she still manages to juggle life in her two worlds.  Despite these reservations I still thoroughly enjoyed the read, and the stunning discovery Stephanie makes at the end took me completely by surprise, so I’ll definitely be continuing on Valkyrie’s journey.  My 12 year old son has started the first book so it will be interesting to see if he keeps up with the series too.

Surely there can be nothing more enjoyable than walking into a bookshop on a dreary grey day armed with £15 worth of tokens and the assistance of the most enthusiastic sales assistant I think I’ve ever had the pleasure of dealing with?  As I won the tokens for a Writing for Children competition I thought it was only fitting to spend them on some top YA and 8-12 novels, and the shelves were literally bulging with goodies.  (So tightly packed, in fact, that one needs two hands in order to prize a book out from between its bedfellows.)  I’d forgotten how pleasurable it is just to browse, judging a book by its cover alone rather than by price, 5 star reviews or the recommendations of the Amazon robot. 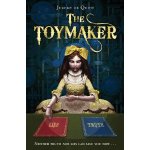 The first book to catch my eye was The Toymaker by Jeremy de Quidt.  I knew nothing of the title or the author, but the cover features a wonderfully sinister jointed doll pointing to the word ‘Lies’, and the blurb is poetically creepy – “Hold your breath, because the little coachman with the razor sharp knife is coming.”  One to be read in a light, crowded room I think!

It’s always a joy to find a new book by a favourite author, and Scott Westerfeld’s Leviathan looks wonderful.  With its steam punk style cover, raised silver title and quote from the Sunday Telegraph – “When a book pursues you into your dreams, you can’t ignore it” – it promises to be an intriguing read.  Westerfeld’s Uglies quartet is an inventive, action packed read and I know he won’t disappoint.

And for my third choice, it was really time to catch up with the third volume of Derek Landy’s Skulduggery Pleasant series, The Faceless Ones, especially with the fourth book already out in hardback.  Landy combines laughter, horror and action with ease – although what’s happened to the colour-tipped pages?  I prefer the look of my other two volumes with their distinctive orange and green edges.

A gold star for Waterstones, then, for not only giving me a great 3 for 2 deal but also recommending a host of new books for the next time I’m in store.  Chris Priestly, Neil Gaiman’s Graveyard Book and the last Chaos Walking book by Patrick Ness await my next visit.  Perhaps it’s time to give up my murky Amazon Sellers habit for good.