Probably the most important thing you can do this year to increase your chances of success – apart from writing your brilliant book, of course – is to boost your web profile.  If you’re looking for inspiration, why not try:

All these ideas are discussed in detail in my article Get Creative with Social Media in Writing Magazine, February 2013 (available in the UK in WH Smith).  Plus ten tips for getting creative, and a step-by-step guide on using WordPress to create an interactive story, just like I did. 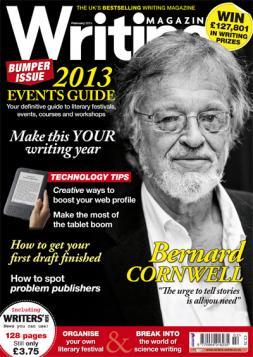 At the end of the last episode of the interactive story, 45% of you voted for Choice A.  So it’s off to Mould World, or Mould Park as it has been hastily rebranded, to avoid confusion…

The Adventures of Boz Part 5

The boring machine, actually a lot more interesting than it sounds, pressed on, churning up slime as it careered through the tunnel.  Boz gasped.  It was heading straight on!  They were about to emerge on the crumbling cliff edge which led to the Boiling Sea!

“Goodbye, cruel Scumworld,” Boz said, gathering his nearest children to him and crushing some of them in a final deadly embrace.

At the last moment the machine swerved to the right, almost as though some higher power had decided Boz’s destiny.  Boz brushed the remains of his children from his chest and cheered up.  In fact, he cheered up immensely.  His nerves began to tingle, and his two hearts sped up as though racing each other to the operating table.

They were going to Mould Park.  Five miles of mould-themed extreme fun.  Mrs Boz had banned him from ever returning, but he couldn’t help it.  He was trapped in an out of control machine driven by three hundred of his children.  Surely she would understand.

The machine emerged into daylight.  Spread out below them was a huge natural bowl filled with mould.

“Welcome to Mould Park!” trilled a merry voice as the babies climbed out, gurgling.  “I’m Mouldy Wouldy!  Would your kids like a photo with me?”

Before Boz could answer, the mould-encased costumed character had set up a tripod and grabbed the first of the babies.  Boz shrugged and walked past.  Mould Park was waiting for him in all its decaying glory.  It would be just like the last time, when he had spent six months and all his Scumworld dollars on one long Mouldycoaster ride.  Bliss.

Boz felt a hard slap on his cheek.

“I can’t believe you brought them here, of all places!  Have you forgotten your five-step mould addiction plan?”  It was Mrs Boz.  He had forgotten how beautiful she was.  With her protruding forehead, wart-tipped nose and greasy strands of hair, she was a match for any of Scumworld Six’s top totty.

“It wasn’t me, it was them!”  Boz pointed at the babies, half of whom had now been photographed with Mouldy Wouldy and were climbing on to the Putrid Puffa, a junior rollercoaster which promised a near-death experience.  “How did you know we were even here?”  As he said the words, his heart sank.  “It was Slimy Sorg, wasn’t it?  The sleazebag.  I knew he had a thing for you.”

Mrs Boz tossed her greasy locks.  “Actually it was these boys.”

For the first time Boz noticed the two tall, hunky blue aliens flanking his wife.  They wore loin cloths and each carried a large ray gun.

“That’s right.  I was hoping they’d appear before now but nobody ever voted for that option.”  Mrs Boz’s eyes flicked briefly away as though looking reproachfully at someone just over Boz’s shoulder.  “They’ve promised me a better life, far away from here.”  She reached out an arm suddenly to her husband.  “Come with me, Boz!  Let’s start afresh in a warmongering alien dictatorship!”

Boz was taken aback.  Leave Scumworld Six?  Leave his beloved slime?  Not to mention Mould Park.  How could he live without the evil smell of rot and decay filling his nostrils every day?  “I’m sorry,” he said finally.  “But I can’t live without -”

“The children?”  Mrs Boz’s face lit up.  She signalled with her hand and celebratory exploding ants hurled themselves into the air, detonating their innards to spell out the words ‘SCUMWORLD’S TOP DAD’ in the air.  “I knew you’d pass my test!  Well, to be honest I wasn’t quite sure.  In fact, I was convinced you’d fail.  But that doesn’t matter, because you passed, my darling, you passed!”

Mrs Boz enveloped him in a hug.  The two Narvagins stepped out of their costumes, revealing themselves to be two of Boz’s workmates from the mine.

“You…!” grinned Boz, pretending to threaten them.

“Some of them are still at the mine,” Boz began to explain.

“The ones Slimy Sorg didn’t shoot with his air gun.”

“And I did sit on some earlier.  And hug a few to death when I thought we were about to go over a cliff.”  Boz stopped, looking worried.  “I am still Scumworld’s top dad, aren’t I?”

Mrs Boz put a hand on her husband’s shoulder.  “Why do you think we had three thousand in the first place, darling?  Don’t worry, we’ll collect the ones that survive the Putrid Puffa ride.”

Arm in arm they walked away, chuckling gently.

Overhead a Narvagin ship cast a huge shadow over Mould Park, its massive artillery poised in readiness for complete carnage.   A thin blue head poked out of the driver’s side window.  “Yeuch, this place is, like, rancid!” it squealed.  “Get out of here, dudes!”  And the ship sped away back into the stars, as quickly as it possibly go.

Thank you to everyone who voted.  I hope you enjoyed reading Boz’s adventures as much as I did writing them, and I am delighted to award a free family ticket to Mould Park for the person who voted the most over the series!*

* Terms and conditions – Winner must not be related to Mould Park staff and must provide own transport to and from Scumworld Six.

You chose option C with 56% of the votes, meaning that 500 newborn baby slimeworlders have climbed into a slime mining machine and grabbed the controls. That says more about your state of mind that mine, but if that’s what you want…

Catch up with previous episodes here.

The Adventures of Boz Part 4

Boz felt torn. If only he could rip himself in three and rescue all his groups of babies! But those days were behind him, and patch up operations weren’t cheap any more. He would have to prioritise.

He leapt towards the slime mining machine. It was amazing how the little critters had just jumped right in there, as though they knew slime mining was in their blood. He would be proud to have them working alongside him in the future , wasting the precious few years of their little lives scraping slime off the walls of underground tunnels, but for now he had to stop them. After all, they hadn’t been trained in drilling, and even if they had, there was health and safety to think about. Where on Slimeworld Six could he get 500 hard hats in a hurry, and did they even make them in ‘newborn’ size? The logistics were exhausting. He would just have to try and stop them.

Instructing his boss Slimey Sorg to round up the rest of the tribe, he leapt into the mining machine just as it began to career towards the mine entrance.

“Daddy’s here!” he yelled, landing in the driving seat. Good, he had only squashed a few. And he had a feeling those weren’t going to be his favourites anyway.

But it was too late to take control. The vehicle was plunging into the entrance tunnel. The rooneys scattered, and a few made it to the outside. The weight of the vehicle crushed the rickety lift and Boz and his babies dropped down into the mine like a bomb from a Nargavin deathship.

“This is Daddy’s work,” Boz said proudly as the babies zoomed through the lower levels of the mine. “And that’s where the Flat Five got squashed last year – hang on, where are you going you little critters?”

The machine blasted through a mine wall, splattering a tidal wave of slime, and emerged into a cool, dark tunnel. It appeared the babies had managed to find a shortcut into the Slimeworld Underground system. Perhaps they knew what they were doing after all? Boz removed his hands from over his eyes and peered through the darkness. As far as he could recall, there were only three destinations this far east of town. Where were the babies taking him?

It’s over to you.  Time to vote and seal their fate…

The votes are in and the winner is Option C, so let’s see how those baby scumworlders are going to cope without mum (you cruel voters, you!)…

Catch up with previous episodes here.

The Adventures of Boz Part 3

Boz shuffled the ant entrails around with his foot.  “They’re all yours,” he read out slowly.  Was this Mrs Boz’s way of sending him some lunch?  If so, he really didn’t like the look of it.

“But I’ve missed the birth!” Boz cried, his heart sinking.  “Is… is she angry with me?”

Sort guided Boz to the rickety wooden lift and they were pulled up to the surface by a team of slow-witted apes, or ‘Rooneys’ as they were known.

Boz climbed out into the bright daylight.  The rocky world of Scumworld Six was harsh and featureless – apart from a giant basket of baby Scumworlders right in front of him.  Boz’s eyes filled with tears of emotion as he peered into the basket at his spectacularly ugly children, pushing and shoving each other and wailing horribly.  Then he saw the note.

Boz spun round wildly.  Sorg was right.  Unattended, the babies had been escaping.  They grew fast in the slime-enriched climate of Scumworld Six and were already crawling in every direction.

“Well,  at least there are 500 left,” he said, glancing nervously at Sorg.

“Boz….” Sorg said warningly.  “Are you a dad, or aren’t you?  Come on, take some responsibility!  And this air gun.  With a few good shots you can pick off that lot on the horizon.”

“No!” protested Boz, waving Sorg’s gun away.  “I’m going to do this properly.  I’m going to be a father and prove myself to Mrs Boz!”

Rolling up his slime-stained sleeves, Boz prepared to leap into action.  But which babies should he rescue first?  There were thousands of them!

It’s been very exciting watching the voting for what’s going to happen to Boz in part 2 of the interactive story.  Option C, invasion of Scumworld Six, was a clear winner most of the way through with the other votes split between Boz being given the sack and his wife giving birth to three thousand babies.  However at the last minute there was a rush on Option B and so poor Mrs Boz is about to give birth.

I’d been mentally composing an invasion scene in my head all week but that has had go (perhaps the Narvagins will return later?) and instead we are going to see how Boz copes with fatherhood.  I’ve got a feeling things are not going to go smoothly…