I am delighted to share the success story of Trudi Granger, a reader of this blog, who is due to have her picture book ‘Always There Bear’ published next month by Top That! Publishing. 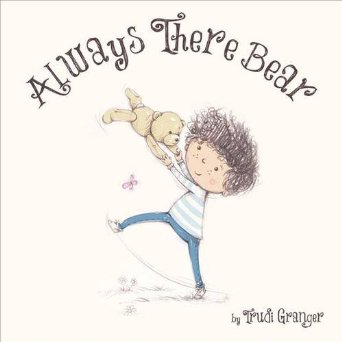 What is your background and how long have you been writing for?

Ahh my background….. banking law!  For quite a few years I was a senior associate in Australia.  So, in a sense I have been ‘writing’ for years, in the form of loan agreements and other finance documents, as well as legal articles.  However it was not until 3 years ago when I returned to the UK with my husband and children that I started to think about writing for children.

Slowly, little picture book ideas formed in my mind and I started to note them down.  However, it was not until about 18 months ago that I started to formulate my first picture book story.  After so many years of legal writing – where you write with absolute precision so that there is no ambiguity – it was quite liberating to write something for children, where the language could be simpler, more lyrical and encourage imagination, particularly once the so very important illustrations were added.

What made you write Always There Bear?

I wanted to draft something that was reassuring and heart-warming for young children.  I wanted to create a story that could be read at bedtime and put the listener in a ‘good place’ when the lights went out.  (Clearly I also had the interests of the parents in mind as well!).  My thoughts focussed on teddy bears and the fact that many children have a special cuddly toy which they take around with them to share the good times and make the not-so-good times better.  How many times have parents managed to stop a child being upset or scared by handing their child their special teddy bear?  And how many times do little children decide to take a cuddly toy with them on a special outing or to nursery?  So many of them have an ‘always there bear’ who almost becomes one of the family.  And so that is what I tried to embrace in the picture book.  Coincidentally, just as I was at the stage of submitting the draft I read an article by historian David Cannadine about the enduring appeal of teddy bears.  Following his article, readers wrote in to tell their stories about the importance of their childhood teddy bears.  This made me wonder (and hope) that perhaps parents/carers/grandparents reading this book to children might also have an appreciation of the very simple message the story was intended to convey.

Tell us about the publication journey – did you submit to many places?  How did you feel when you got an offer?

Being a complete novice I had been a bit hit and miss sending off other submissions in the first couple of months until …. I came across your blog and the list you had created of publishers accepting unsolicited submissions!  It was by studying that extremely useful list that I got a more comprehensive understanding of children’s publishers and what they wanted.  Having taken a rather scattergun approach with earlier submissions (which is a real no no), this time, with ‘Always There Bear’, I was more measured, took time to look at the types of books the various publishers were currently advertising, and probably submitted the draft to only 5 or 6 publishers, including Top That! Publishing, who accepted my submission.

Unsurprisingly, I had been the recipient of my fair share of rejection letters (and worse still, deafening silence) in relation to other submissions, so the submissions for ‘Always There Bear’ were sent off with some realism as to what the response would be.  However, as with lottery tickets, we know the odds, but we still live in hope that fortune might favour us.

As regards how I felt when I received the offer via email – delighted, but slightly disbelieving!  I clicked on the email several times on the day it arrived and read it very thoroughly each time to make sure it did indeed say what it did.  (It was rather like that feeling you get when you leave the house and wonder whether you have indeed switched the oven off.  You know you have, but you still have to go back in the house to double check!)

I felt very green when I first found the courage to email Top That! Publishing, and explain to them that this was my first foray into writing and would they please explain to me what would happen once contracts had been signed.  They explained that the book, once the illustrations had been completed and the format signed off, would be showcased at the Frankfurt book fair, and would be due for publication in mid 2014 (now February 2014).  Top That! Publishing selected an illustrator, Gareth Llewhellin, and I have to say I was delighted when I first saw samples of his drawings for the book.  The illustrations complement the book completely.

Has being published changed your writing ambitions at all?

That’s an interesting question.  I am sure that many people, before they have anything published, have that feeling that they must keep going as they want to achieve the success of publication.

However, now that I have had my ‘fix’ of publication success there is indeed that feeling of wanting to go further.  Ideally I would love to be able to write a story for 7-9 year olds.  I have an idea, but I am very new to this craft and the standard is so very high.  So, I am realistic.  I shall carry on writing and will submit when I think something might be suitable.  However, if writing remains just a hobby for now, I shall be happy simply to have had the experience of having a book published and to have been introduced to an industry that I would otherwise never have known nothing about.  It’s been an enlightening journey!

What’s your advice to other writers hoping to be published, particularly in the picture book field?

Keep writing!  Always have a pen (or in my case, propelling pencil) and paper to hand to jot down your ideas as they come into your head.  Read other people’s writing blogs.  Go in for writing competitions.  But whatever it is, make sure it feels right for you.  And, most of all, I wish you all the very best of luck!

Thanks so much for your time, Trudi, and congratulations on your success!

‘Always There Bear’ will be available in bookshops and on Amazon from February.