I first heard of Incarceron at the 2010 Winchester Writers’ Conference at a seminar about Young Adult Dystopian fiction.  The premise, a futuristic prison suspended from a keychain, sounded intriguing, and it was the first book that I paid to download on my new Kindle. 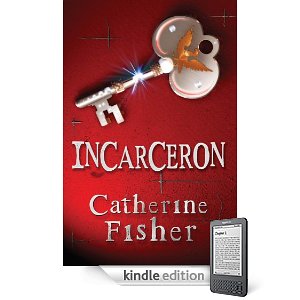 ceron is an absolute joy to read.  It is a winning combination of fantasy, science fiction, elements of horror and the hint of a love story.  The world Catherine Fisher has created is dense and rich with myth; a ravaged moon, a fake world of false protocol and suspended development, and, most amazing of all, a new world created to house half the population: a prison that will nurture and reform its inmates and create a paradise.

But, like all good fictional paradises, Incarceron becomes evil.  A theme in the book is whether the corruption of the prison is caused by itself or by the nature of its inmates – mankind itself.  What is freedom?  Are we imprisoned in our own natures?  Or are we always prisoners of society, no matter if we are inside or out?

The book takes two main strands: it follows Finn, a young prisoner suffering from fits and amnesia, as he attempts to find the mythical exit into the Outside; and Claudia, the daughter of the Warden of Incarceron, betrothed to a posing prince and, together with her tutor Jared, determined to find out the truth about her father’s work and what happened to the previous prince Giles, who died in mysterious circumstances.  No prizes for guessing who she thinks Giles could be, but there are plenty of genuine surprises along the way as Finn and his companions negotiate an increasingly traumatic and dangerous journey while Claudia risks everything to prove that Prince Giles was imprisoned and should be the rightful heir.

I can’t do justice the book by describing the plot.  The action positively fizzes with drama.  But what makes it really special is the unforgettable characters, especially Finn himself and his oathbrother Keiro, a flawed but magnetic character you can’t help but admire.  The gentle tutor Jared, working quietly against the system, is also a wonderful creation.  And of course the prison itself, Incarceron, is probably one of the most original characters in recent fantasy fiction.

The sequel, Sapphique, brings the story to a nailbiting finale.  Filming of Incarceron will be starting shortly with Taylor Lautner from the Twilight films playing Finn.  My advice is to read the books quickly and experience the real Incarceron for yourself.

In each book I read from now on I will be making notes of how I can learn from the author and improve my own writing.  Catherine Fisher’s work is a brilliant example of how to get everything pitch perfect.

As this was my first e-book experience, I thought I should add a bit about what it was like.  I feel the method suited the book perfectly, being a mixture of new technology attempting to recreate the experience of the old.  My only criticisms are that the formatting was sometimes slightly out, with the odd line finishing half way across the page, and also in the sequel, Sapphique, most of the text appeared in italics until after I had read it, which was a shame as length italics can be irritating, and there were genuine small areas of italics at the beginning of chapters which no longer stood out.  Whether that is a problem with the book or my own settings I am not sure.

4 thoughts on “Review of Incarceron by Catherine Fisher”