Anyone like me who has just finished the last book of Patrick Ness’s amazing Chaos Walking trilogy will no doubt be experiencing the same symptoms: shock, sadness and a sigh of satisfaction at the perfect ending to what has been a long and exhilarating journey. 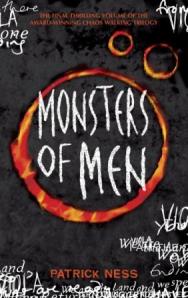 Chaos Walking began with the prizewinning The Knife of Never Letting Go, which introduced us to New World, a freshly colonised planet where a ‘virus’ causes the thoughts of men and animals to be audible to all.  Only women are immune.  The tension caused by this phenomenon results in horrific events.

The story is told in two voices: Todd, a boy settler who is running away, and Viola, the only survivor of a crashed scout ship.  Both are distinctive and real, especially Todd’s raw, uneducated voice which adds to the edgy, urban feel of the books despite their fantasy/SF setting.

Another distinctive feature of the books is the use of different typefaces for the ‘noise’ or audible thoughts of the men and animals, and also occasionally for sounds.  It is rather refreshing to see BOOM! written in giant letters on the page!  The effect aids the reader’s immersion into this strange place and is a graphical reminder of the confusion and, sometimes, madness, that is caused by hearing people’s innermost thoughts.

The villain of the books is Mayor Prentiss, a corrupt leader who at first pursues Todd but then tries to take him under his wing.  Like Todd, we are never quite sure whether the Mayor is telling the truth, and whether he is being cruel to be kind or has been completely corrupted.  The Mayor becomes more and more violent and the action in the book becomes more extreme until by book three we are in the middle of full scale war between two strands of settlers, and then between the settlers and the indigenous people of New World, the Spackle.

Book three also introduces Spackle 1017, or ‘The Return’, as he is known to his people, as a third voice in the narrative.  This is well handled and it was fascinating to see how Ness has built up the community of this telepathic alien race, but I couldn’t help racing through it just to get back to what Todd and Viola were doing.  I also found the battle scenes rather long initially; there is a lot of pressing forwards and retreating, winning and losing, rather than progressing with the plot.

However, half way through I was well and truly gripped.  All I could do was read and read, gobbling up the pages.  Would the Mayor change?  Had he poisoned the women?  Would Viola survive?  Could 1017 ever recover from his terrible experiences?  And could Todd and Viola finally save the current and future inhabitants of New World from total self annihilation?

The ending was perfect, the tone full of wonder, hope and sadness.  Readers, from young adult upwards, should approach the series with a sense of adventure, a brave heart and a strong stomach.  Explosions, attempted genocide, torture, suicide, mind control, murder, love, death, war, peace… Chaos Walking shows humanity at its most extreme.  A fascinating achievement.